Making Your Immigration Dreams Come TrueContact Us Now
Lawyers People Love.Contact Us Now
Unexpected Kindness is The Most Powerful, Least Costly, And Most Underrated Agent of Human Change.Bob Kerrey.Contact Us Now
Welcome to Our Home!Contact Us Now
Forging Bonds, Breaking Barriers.We Are Dedicated To Serving The Global CommunityContact Us Now
Covid-19 Updates
Join Our Free Facebook Group
Latest News

Right from the start, we told the secrets that lawyers kept hidden. We demystified the Immigration process, sharing the information that lawyers traditionally used to make things...

Defined: the state or quality of being kind. We believe that being kind and helpful is what our clients expect from us first. Even before solving any problem...

Welcome to Our Home! We believe that by focusing on one thing, we can be the best in the world at it. That’s why we only practice one area of Law, and we are passionate about it...

The U.S. Embassy in Israel is pleased to announce the implementation of the U.S. E-2 Investor Visa for Israeli nationals, beginning May 1. The E-2 visa is a temporary (nonimmigrant) visa...

Immigration in the Trump Era

The San Diego Immigration Law Offices of Jacob J. Sapochnick welcomes you. Our immigration practice is a unique law firm committed exclusively to the areas of immigration and citizenship law. We have big firm expertise in these specialties, but strive to deliver personalized client services at a more economical cost. The practice is a multi-lingual firm and is able to serve clients in a variety of foreign languages: Spanish, Swedish, Mandarin, Danish, Hebrew, French and Russian.

We offer comprehensive immigration services and solutions including:

Work visas are given on a temporary basis. These visas are intended for individuals who would like to come to the United States for employment that is contracted for a specific period of time, and not for an indefinite duration. Each of these visas requires that a prospective employer file a petition with the United States Citizenship and Immigration Services (USCIS), followed by the application for a work visa by the beneficiary. By contrast, the American employer sponsoring the beneficiary to work in the United States is asked to provide information regarding their company, its demographic, as well as the beneficiary’s detailed work experience and skill set to demonstrate that the foreign national is qualified for the sought-after position.

Tourist visas are also known as visitor visas. San Diego immigration lawyer Jacob Sapochnick and his team also call this a visitor visa. These types of visas are nonimmigrant visas for individuals who wish to gain access to the United States on a temporary basis for the purpose of tourism, business, visiting, or a combination of the aforementioned purposes. This is one of the most popular visas as it is essentially for those who wish to visit the US without a plan of remaining in the country for employment purposes.

As an immigration attorney serving San Diego, Jacob and his team receive many inquiries from individuals seeking a family visa. There are two types of family visas that are available, depending on your situation. The first would be an unlimited immediate family immigrant visa which is immediately available to the beneficiary and is thus not subject to numerical limitations, while the other would be a limited family preference immigrant visa, which is not immediately available and is thus subject to numerical limitations. The difference depends on your relationship to the petitioning relative (the American citizen or legal permanent resident currently in the United States). Foreign nationals who are eligible for an immediate family immigrant visa include: spouses, unmarried children under the age of 21, and parents of American citizens over the age of 21. The limited family preference immigrant visa categories consist of brothers and sisters of American citizens, and other, more distant, familial relationships.

The only way to obtain one of these visas would be to have a qualifying relative in the country who is a United States citizen or legal permanent resident (a family member in the United States who is here on a visa will not be considered).

Citizenship is granted to those who were born on United States soil, were born to American-born parents overseas, or those who have gone through the process of naturalization. San Diego immigration attorney Jacob Sapochnick and his team can help you pursue citizenship.

Naturalization is the end result of a permanent visa/Green Card. After a certain number of years (depending on the visa) the individual can go through the process of naturalization where he or she would become a United States citizen.

This section is intended for entrepreneurs. There are five types of visas that an entrepreneur can apply for, depending on his or her position including the: H-1B, L-1, E-2, O-1, and B-1. What all of the visas have in common is that they require the applicant to have been a vital part of starting an organization or assisting in that organization’s growth. There is no specific start up visa at this time.

In addition to entrepreneurs, those individuals who are extraordinary in their field and can prove that they are an expert in their industry may apply for an O-1 visa, that would allow them to work in the United States for a certain period of time, much like a work visa, without sponsorship.

The entire Sapochnick Law team in San Diego, including experienced immigration lawyer Jacob Sapochnick, take their clients through the entire immigration process, from start to finish. We are confident in our abilities to handle all immigration matters and pride ourselves in being one of the top immigration law firms in San Diego. We take our clients and their life stories very seriously and will do everything in our power to make certain that their immigration dreams come true.

Our Videos
Our Law Firm Featured In

Attorney Jacob Sapochnick in the Media 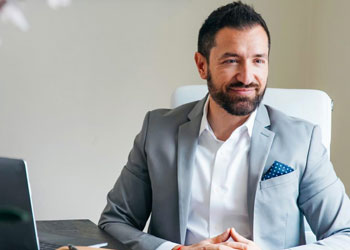 The Law Offices of Jacob J. Sapochnick is a firm wholly dedicated to US and Global immigration law and the highest personal and ethical standard of client service. The firm offers a superior and personable quality of attention. We are experienced, creative and passionate in our work.

VIEW MORE
Client Reviews
★★★★★
Great immigration lawyer, very professional, knowledgeable and experienced. Jacob always answered my questions, e-mails and calls; great customer service from him and everybody at his office. I highly recommend Jacob, probably the best immigration lawyer out there. Plinio Franca
★★★★★
I trust you know how much all of us at the Spreckels Organ Society appreciate your incredible generosity in providing legal assistance with the visas required by the international artists last year during our International Summer Organ Festival. We consider it an honor that you and your firm provided this service, and were delighted to publicize your firm in our concert materials. George H.
View More
Submit a Law Firm Client Review
Video Testimonials
VIEW MORE
New videos every week, please let us know what you'd like to see!

Our Blogs
My American Job

“if you aim is to immigrate to the US through employment, “My American Job” is a great place to begin your journey.“ 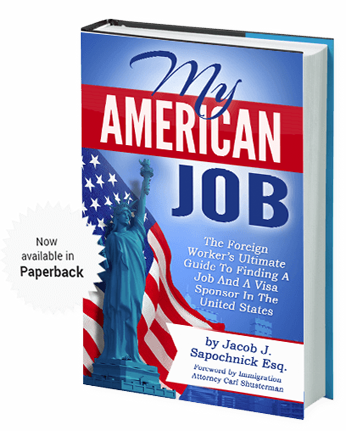